The day started with me waking at 5 o’clock in the morning with a freezing temperature of 6 degrees and almost getting humped by my Seth’s dog. We left the house at 6:30 after having a quick breakfast and at around 6:50 we reached the bus spot waiting for the others. At first in the bus I felt quite lonely because I am kind of an introvert and also because I knew nobody, but as time passed we started talking and by the time we reached Granada we had already became a one nice group. The first destination we visited was La Alhambra which was like a small city built by the Arabs when they ruled Spain. We saw a lot of beautiful palaces and gardens and had a really good time together.
We then went to our hotel for our dinner and honestly that was the WORST dinner I ever had like the beef was sweet, the rice was tasteless and everything was bad. So we just went out to the city centre for eating something and roaming around the city, eating ice cream and watching all the Christmas trees lit up in the city. So we returned to the hotel 12 in the morning and slept immediately as we had to get up real early the next day.

So we woke up at 7:30, took a bath real quick because we had to pack our bags as were going to Sevilla that day after going to Balcon de San Nicolas, which was very cool and we could see almost the whole city from there, we also had a lot of cool pics.
We reached Sevilla at lunch time and had a really nice lunch compared to what we had the last night, we had pasta, chicken nuggets and fries. We then went to discover the city of Sevilla and honestly it is one of the best cities I have ever seen. We also went to the cathedral where there is the tomb of Christopher Colombus. We climbed the whole cathedral to the top and the view was magnificent. I then went with my BB my friend from Thailand to look around and had coffee with the others. We then had dinner at the hotel and after the dinner our group gathered in a room and spent the night talking and playing. It was one of the best night of my life, we finally went to sleep at 2 though we had to get up at 7 the next morning.

The day started as usual, we had a bath, had breakfast and sat in the bus for going to the La Alacazar, which is another monument built by the Arabs. It was so damn beautiful, it had a great garden and a maze. It was exactly the garden I want for my dream house, after that we walked around the small village which was built around it. We finished the visit at around 11:30 and then we had the entire the day off and at 7 we were going to a Flamenco show in the centre because Flamenco is the regional dance of Andalusia.
So we started to go for lunch looking for a nice and local place to eat. We finally found a nice place to eat and ordered some really great food, we had goat’s cheese with honey and crunchy bread, mushrooms in oil and herbs and finally tortilla con patata. We then walked all around the whole city buying some stuff or doing something. We went to Playa de España and clicked some really cool photos of us with our flags from our countries. It was then time for the Flamenco show and it was great, it was totally worth going because I thought that it would be lame and boring but it was the total opposite. Also it was the last night we all were together so we talked for hours, played frisbee’s and danced like crazy. We finally went to sleep at 2, I realised that night I couldn’t have asked for better friends to stay and hangout with and the next day was our last day and we would return to our houses, so I would miss them.

Having being slept at 2 AM last night, we had pretty late morning with the alarm ringing for about an hour until finally waking up at 8, I hurriedly took a bath and went to have breakfast with Seth, Michael and Taylor, my roommates. We first went to Plaza de España where we took some photos and played frisbee while some girls put on music on their speakers and started dancing. Some tourists even stopped to click photos with them and after some time we got into the bus to return to Alicante.
We were going to stop for lunch in Granada which was like 3 hours away so, as usual we put on music and started doing some timepass. Then suddenly the organisers started giving us some small pieces of paper with numbers on them, it was like a lottery and they would give some gifts to the numbers which would come out and I got a small bag which we carry around the waist and the people who got nothing got hats which were pretty cool, we even signed some of the hats as memory.
At around 2 we got down for lunch, the organisers had given us 6 euros each for buying something and what I got was a hamburger and a coke and it costed 8.5 euros, I was thinking that even a mcdonalds would be better as it is damn cheaper than this and is of better quality. So after lunch we got into the bus and I immediately fell asleep and had a nice one and a half hour nap. It was already 5 when I woke up and that meant that we all were only together for another 3 hours. So we put on music, talked and enjoyed to the fullest. I gave everyone my pins from India and everyone was like “Wow they are so cool, can I take them?” And I was like thats why I brought them in the first place so that you can take.
As our first stop ‘Murcia’ got nearer we all got a bit sad and depressed because we would not see each other for a very long time and also the Australians would be leaving Spain in January and we wouldn’t be able to meet each other as they lived quite far. In Murcia when some of my friends got down and especially when Sophie got down we all got really emotional and I literally cried after 3 months. As a matter of fact I had not cried at the Mumbai airport when I was leaving my family, friends and everything and going to a new country all alone. I think that was because I was too damn excited to start my exchange and I did not want to do it by crying.
In an hour we were in Alicante ready to back to home, we all promised that we all would meet again sometime and give our Aussie friends a good farewell. So that was an end to a great tour we had, I really hope that we have more such tours.

Thanks to Seth, Michael, Taylor, Ashtyn, Hannah, Eva,Gabby, Sophie, Lily, Mia, Daniela, Jeeya, BB, Kate and all the others for making this tour such a great one. Love you all. 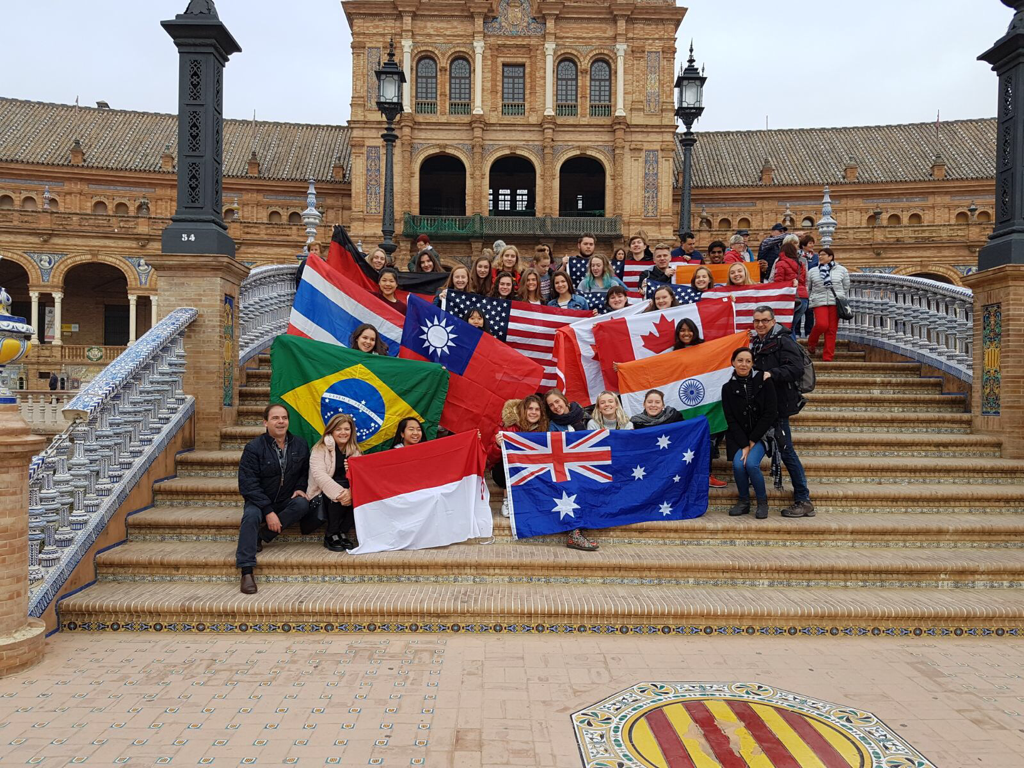